Lanikai is located on the Kailua Bay, along its windward coast. It is among the many unincorporated communities on Kailua and the entire area is popular for its soft, white, sandy beaches and the abundance of hiking arenas along the Keolu Ridge. It is a fairly small community and has a high quality of living primarily because of the location. It is also among the more expensive areas, from a residential perspective, because of the large number of public facilities and especially because of the beaches, the Lanikai Beach in particular. 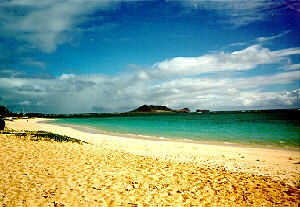 The minimal 2300 population of Lanikai is concentrated in the housing area that lines the Lanikai beach, elevated from the sands. The location renders a hefty price tag on most of the houses in the area, which are predominantly ocean front homes and almost all the properties available here come with a view of the pristine ocean. Moreover, the elevated residential area ensures breathtaking views of the beach and ocean.

Around 30% of the properties in this coastal community are rentals and the housing area has a population of 1800 of the 2300. The area is rated as among the most beautiful places in Hawaii and residents enjoy access to swimming facilities, water sports, recreational golf facilities and coconut palm trees. In addition, some of the best beaches are in the region, with the small 0.6mile stretch called the Lanikai Beach being rated as the best in America. The residential area is quite communal in nature with a lot of group activities running at the same time. One can find residents interested in theatre, crafts, marine life and much more.

Along with rentals, properties change hands as the calendar months go by but due to the high prices of homes, it is best to live in a rental, especially for short periods of time.

Being a suburb of a coastal town on an island, this community enjoys a typical seaside climate. It is warm and humid almost the entire year and being on the windward coast, rainfall is abundant too. In comparison to the rest of the island, the temperature is a little lower because of the trade winds and the rainfall. The daytime average is between 75ºF and 85ºF and the night average drops to 65ºF. Average rainfall varies between 4-6 inches and it is concentrated mainly between the months of October to April. The heavy rainfall ensures that the area is always lush and tropical.

The residents of the housing community in Lanikai are fairly affluent and are comprised mainly of long duration tourists or wealthy retirees. Irrespective of their age or duration of stay everyone is interested in maintaining the communal nature of living and actively participate in the many clubs available. The small population makes residents familiar with one another and new residents are welcomed with ease into the community.

Lanikai is located within 20 minutes of the Kailua town that is no different in facilities from any Tier II city in the United States. However, within Lanikai is an elementary school and several healthcare facilities. The nearest reputed high school is in Kailua but the area is spotted with several reputed private schools. In general, the region undoubtedly has among the best quality of life ratings in the United States.

Lanikai residents lead a reasonably laid back life with a relaxed attitude that goes with the setting. The beaches and other natural sceneries are intact despite the onset of modern lifestyles. The meaning of Lanikai, “heavenly sea”, can be seen to this day in the region.