As of 2009, 2,311 households were registered in Keauhou, of which 1,869 were family households and 442 were non-family households. Group quarters amounted to 81 in number. The median household income in Keauhou is $69,307. 86.8% residents of Keauhou speak English at home, 3.7% speak Spanish while the others speak various Indo-European and Asian or Pacific Island languages. The foreign born population in Keauhou amounts to 244 or 10.2% of the population. 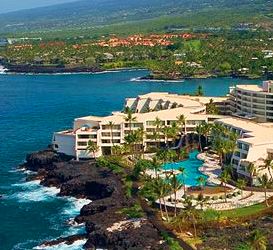 The median number of rooms in houses and condos in Keauhou is 5.1 while the median number of rooms in apartments is 3.4. Among owner occupied houses, 4-bedroom housing units are the most common, amounting to 162 while 5-bedroom units stand at 147 followed by 6-bedrooms at 113. In renter-occupied apartments, 3-bedroom apartments seem the most popular, amounting to 89 while 4-bedroom and 5-bedroom houses come next, being 62 and 65 in number.

According to the year in which housing units were built, the median house/condo value is highest for houses built after 2005 amounting to almost a million dollars in 2009, though prices fell in 2011. The next highest value is for units built in 1990 to 1999 followed closely by the ones built from 2000 to 2004.

The real estate in Keauhou, as is the case of other Hawaiian towns, was at its peak during the construction boom in 2006 and has fallen sharply due to the global financial crisis. The real estate was at its peak during Q1 of 2009 with the median house or condo value standing at $693,564 and with the maximum number of houses sold that year. Here the mean value of single detached houses was $520,210; whereas townhouses were sold for $490,351. The prices of 2 unit, 3 unit and 5 unit structures varied between $48,000 and $589,000.

Q2 and Q3 were the peak periods of real estate of the island but by the end of 2009, with the dawn of global financial crisis the real estate prices fell sharply to about $310,000. The maximum numbers of housing units in the past few years were also sold during the end of 2009 amounting to almost 230 homes.

The first quarter of 2011 saw some hope with real estate prices rising to a tentative $325,000 but eventually falling to $300,000 in Q2 when the maximum number of households of the year was sold, amounting to 300. The third quarter again saw a slight decline in the median price. The number of houses sold during this period however, fell drastically to around 100 despite the lowest prices recorded in the past few years.