Everybody in our small town has been so excited with the news that president elect Obama and his family chose to spend their Christmas vacation here in Kailua. 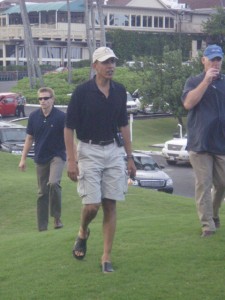 On Christmas Eve our nanny Nina was bringing our kids home from the park and was overwhelmed by a motor cade transporting President elect Obama to nearby Mid Pacific Country Club. 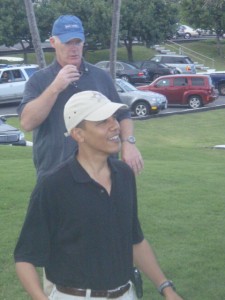 My father in law Dale and I had to make a quick run to the store to get a few last items needed for the Holiday dinner. So we decided to stop by the golf course to see if we could spot Obama golfing. We pulled up just as he was teeing off the tenth. He was very friendly to other golfers waiving to them as they were gawking.

When we returned from the store we let the family know that we had seen him tee off on the 10th hole. We figured he would be returning to the 18th soon. So Dale, Nina, 5 of the seven kids and I decided to walk up the street and wait for him to return. April my wife would of loved to come, but is on bed rest pregnant with twins :-)

Word around the neighborhood had spread he was golfing at Mid Pac and there was a small gallery gathering around the 18th in anticipation of catching a look at Obama.

The secret service was very friendly and did not make us leave. They let us all know to stay where we were and not approach the green as he arrived or they would have to tackle us. Everybody chuckled at the comment. We were all very excited when we saw his golf cart coming up towards the 18th green. There was a little disappointment when the crowd realized he was not actually going to be finishing the 18th hole.

We were all watching form a distance as he unloaded the golf clubs and shook hands with other golfers that accompanied him. He surprised everybody and started walking towards us all. He came right up to us, wished us a Merry Christmas and shook everybodyâ€™s hands. My kids were very excited to be shaking hands with him and a few of them said they were not going to wash their hands. 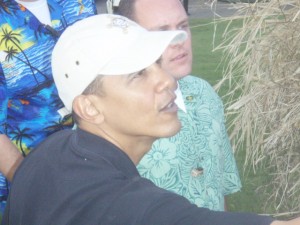 He was a great sport when my neighbor Jan asked him how his game was. He said â€œit was terrible, but it didnâ€™t matter and that his basket ball game was a lot betterâ€.

This once in a life time experience made my kids Christmas a little more memorable. 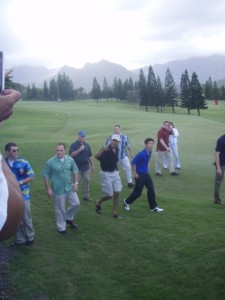 Obama waving good bye to us. 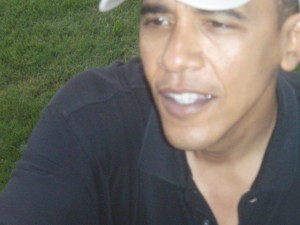 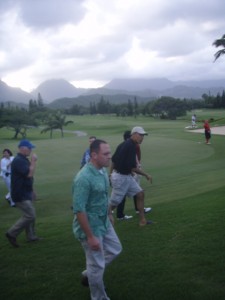 Thank you for taking the photos Nina :-)