One of Hawaii’s greatest cultural destinations, Keauhou is surrounded on the north coast by the beautiful Kahaluu Bay, and with Holualoa, the renowned coffee plantation, on the slopes of Mount Hualalai beyond. Keauhou is ideal for water sports such as snorkelling, scuba diving and kayaking with its perfect water temperatures throughout the year. Keauhou in ancient times was a favourite getaway of many a Hawaiian royalty that lead to its culturally rich heritage of heiau temples, ancient fishponds and a number of historically important sites. Keauhou also has a number of golf courses, spas and restaurants along with a thriving social community. 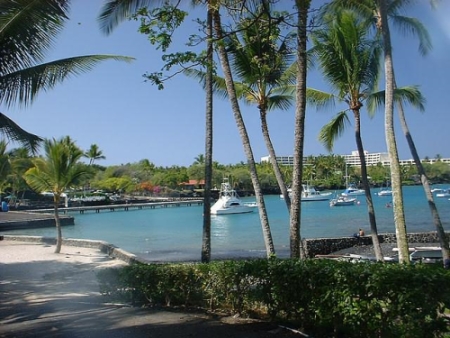 These factors make the place not only an ideal holidaying spot but also provide the ideal atmosphere to live in. Some information on various aspects of life in Keauhou has been outlined below.

The water temperatures range from about 24 degrees to 27 degrees Celsius, keeping them comfortably warm and enjoyable throughout the year. The total precipitation in Keauhou over the year is 11.13 inches which ranges from 0.46 to 1.86 inches per month with the highest rainfall in December and the lowest during the month of June.

While many good schools and colleges are available in the adjacent Kailua-Kona, very few are found in Keauhou, two of which are the Hawaii Montessori School and the Makua Lani Christian High School. Both of these are private schools and have facilities for students from kindergarten to grade 12.

The University of Hawaii in Hilo and the junior college, Hawaii Community College are both situated about 53 miles from Keauhou.

The unemployment rate in Keauhou is about 9.50%. The maximum working populace in Keauhou are employed by private companies which account for almost 80% of all jobs. State and government workers constitute the next highest subgroup while self-employed and private not-for-profit wage and salary workers are ranked next.

The annual Earth and Ocean festival is popular among both locals and visitors. The festival showcases Hawaiian cultural practices with Hawaiian film presentations, performances by hula artists and other activities.